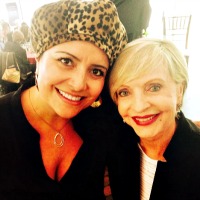 At the luncheon, the Alzheimer’s Association honors individuals whose sensitivity, empathy and ability to instill a sense of hope distinguish them and inspires others. 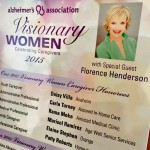 America’s mom, Carol Brady of the 1970’s Brady Bunch, was played by Florence Henderson. Florence Henderson, who is now a vivacious octogenarian, was the guest speaker at the event.  She shared her experiences as a caregiver from a tender age beginning with her father, who was an alcoholic. Florence Henderson and her sister helped him recover from his downward spiral after their mom left him.  Later in life, her husband became terminally ill with lung cancer; she spent the final months of his life caring for him.

Florence Henderson had the pleasure of recognizing 18-­year-­old Daisy Villa of Anaheim, one of the luncheon’s honorees as a Caregiver of the Year. Daisy is an Alzheimer’s caregiver. Since she was only 14, Daisy has gone straight from school to tend to her Alzheimer’s­ stricken grandmother; Daisy embodies all the qualities of a “Visionary Woman Caregiver” – even at the tender age of 18.