The perception of “the OC” is one of sunshine, beautiful beaches, affluence and high-end homes. That perception is partially true. However, there is another no-so-sparkly reality of poverty, hunger and homelessness. Since 2014, the annual number of Orange County homeless people has increased by an alarming twenty percent. 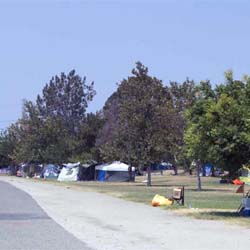 The Santa Ana River bed behind the Honda Center has seen an especially marked rise in Orange County homeless. In December 2016, the Cerna Foundation volunteered time and supplies to those people living there. Recently dubbed “Skid River,” the conditions observed, are bleak. The stories of those living there are even bleaker.

Currently, over 500 people call the river bed home. Even entire families with young children live in tents under overpasses. When people end up homeless, so do their pets. Dogs are also in need of supplies and care.

The experience has lit a fire within the offices of the Cerna Foundation. While the county debates on how to alleviate the Orange County homeless problem, these people need help now. The Cerna Foundation has begun a fundraising campaign as well a drive for supplies to assist those 500 people living on the river bed in Anaheim. The situation is urgent. High waters and flash floods from the rainy season threaten safety and the meager belongings of the Skid River homeless.

The Cerna Foundation is a not-for-profit organization established to raise money, awareness and volunteers to care for those in need. Donations and contact can be made at thecernafoundation.org.
*********************

Orange County Homelessness on any given night: